Thank you for the possibility to present our interdisciplinary project "Digital Iron Age" (EisenzeitDigital; EZD) on this occasion. The thanks also come from my colleague Stephan Lücke who unfortunately can not attend this presentation. 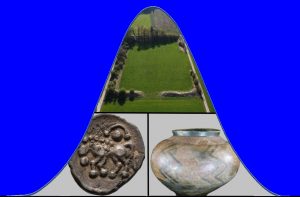 In the following, I will give a short introduction to the structure and the preliminary results of the project. 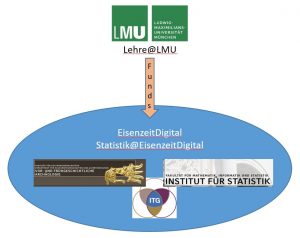 The project is run as a cooperation of three different institutions at Ludwig-Maximilians-University (LMU) in Munich, Germany:

Over the past four years the project has twice been funded by Lehre@LMU, a scheme aiming to support the development of digital training courses to improve teaching at LMU Munich. 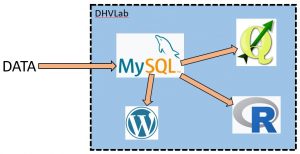 Both the database and the analysis tools are accessed via a virtual platform called "Digital Humanities Virtual Laboratory", DHVLab, which has been developed as a teaching platform as part of the initiative “Digital Campus of Bavaria” (Digitaler Campus Bayern). 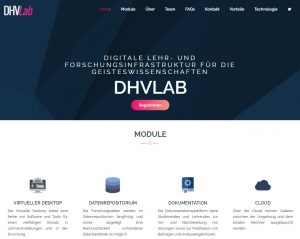 DHVLab comprises a series of digital tools all of which can be accessed and used online. Most important for the project Digital Iron Age are: 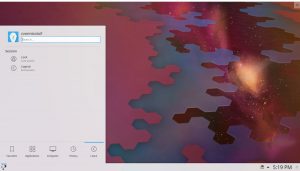 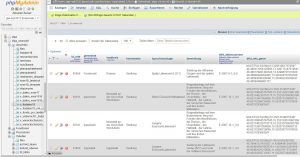 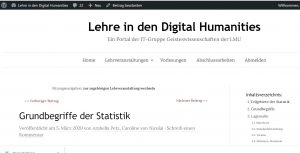 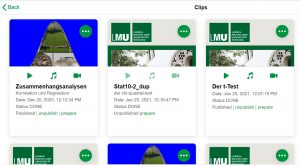 The project was run in two consecutive stages: 2. The Iron Age in Bavaria

The database is fed by different sources including: 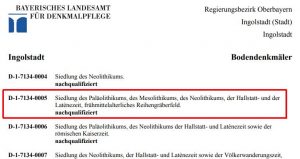 List of archaeological monuments compiled by the Bavarian State Office of Heritage.

Information system compiled by the Bavarian State Office of Heritage. 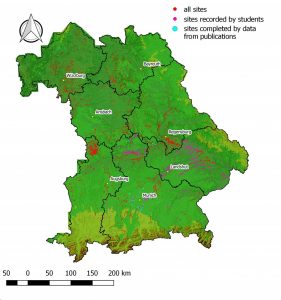 Sites registered in the database so far (CC BY-SA 4.0 authors). 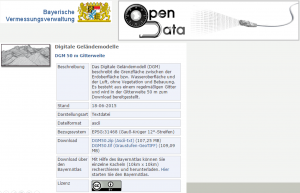 So far, our main focus has been to teach the students the necessary technical skills to use MySQL, QGIS, and R, while the data processing and analysis are still in its beginnings. Therefore, we can only give an idea how we will use and interpret the data in more detail in the future.

The total number of sites used in the following is 10.772. 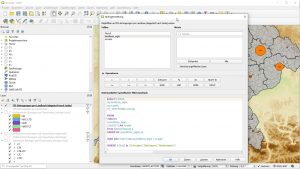 Dialog box in QGIS for entering a SQL statement to retrieve georeferenced data from the MySQL database (CC BY-SA 4.0 authors).

Mapping of the Iron Age sites in Bavaria revealed a bimodal distribution of settlements during both the Hallstatt and La Tène periods.

Most sites are located along the rivers Danube, Isar and Main, as well as in and around the modern agglomerations. This site distribution is hardly surprising since large river valleys have been densely populated ever since Neolithic times. Areas with good soils generally yield high agricultural returns making them favourable locations for settlements. 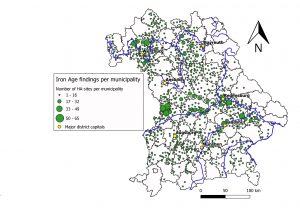 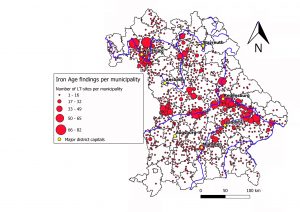 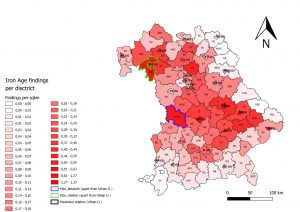 The Nördlinger Ries in the district of Donau-Ries (DON, county of Swabia), for instance, is an impact crater that is characterized by fertile loess soils and a mild climate, so its settlement density was high in almost all prehistoric periods. 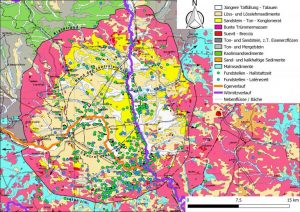 It has also yielded a very large number of sites from the Iron Age: Currently 701 sites are registered in the database over an area of 1.275 km2 (0,55 per km2). That is the highest absolute number of Iron Age findings in a Bavarian district.

However, we have to consider several biases when studying the distribution of sites:

Archaeological site discovered during the construction of a route (© K. Leidorf). 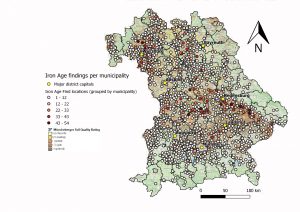 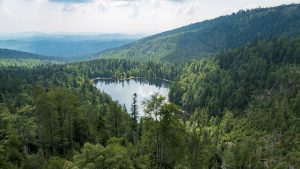 Pastoralism is the dominant form of agriculture in the southernmost parts of Bavaria (© M. Fesq-Martin).

The site distribution may also be biased by factors such as 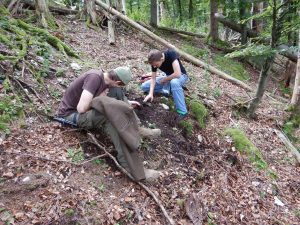 In spite of these important positive and negative biases, we can still assume that the settlement density was really lower in the Alpine foreland and in the Bavarian Forest than in other parts of Bavaria:

“the maximum human population size that can be supported in a given unit of space”, without damaging or destroying its ecological system. It depends on “the physical and biological characteristics of the region being examined”, as well as “on the type of agricultural technology and techniques possessed by the population that affect the productivity of the crops grown in that region” (Currie et al. 2015). 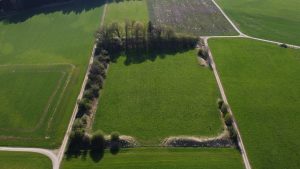 Aerial photography of the Viereckschanze of Neufahrn near Buchendorf, an enclosed farmstead of the Late Iron Age. The wall and ditch of the square enclosure are still well preserved (© F. Fesq).

Therefore, the Viereckschanzen of the Late La Tène period that most archaeologists interpret as enclosed farmsteads were frequent in areas, which were particularly favourable for prehistoric settlements and agriculture, with high annual mean daily insolations, good soil qualities, and easy access to watercourses. 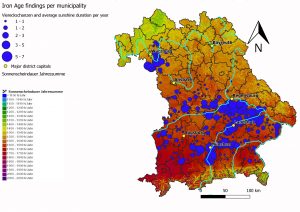 The residents of these farmsteads were probably able to produce a surplus of agricultural products, that allowed to feed not only the owners but also one or two dozen of dependants, that were necessary to build the massive enclosures and to run the farmsteads. 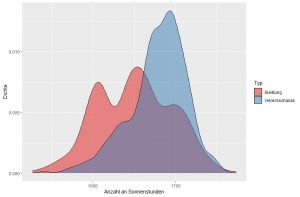 On the contrary, in the Alpine foreland and in the Bavarian Forest the possibilities to produce enough food for a large number of inhabitants were certainly restricted in comparison with other areas due to the higher elevation, the lower soil quality, the higher precipitation rate, the shorter vegetation season, the higher number of frost days and the lower solar radiation per year. It is thus hardly surprising that the population density was lower in these mountainous regions, where animal husbandry, especially the raising and breeding of sheep and goats, might have been the predominant form of agriculture in prehistory. 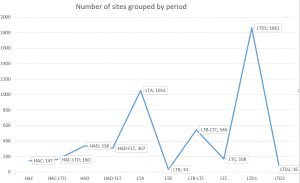 Number of sites from the Iron Age, grouped by periods. The number of sites that could be taken into account for this diagram is only n = 4650 because many others are only attributed to either HA or LT without further specification (CC BY-SA 4.0 authors).

The data query also shows that the number of La Tène sites is higher than that of Hallstatt sites. The dataset contains 6266 records of the La Tène period, in contrast to 4506 sites of the Hallstatt period.

Especially from La Tène C onwards, the number of sites increases considerably, to reach its peak in La Tène D1. In particular, the number of settlements rises substantially since 150 BC. 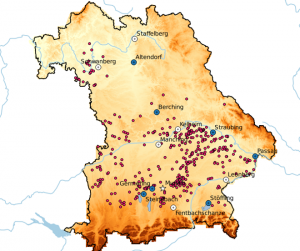 Again, the number of sites is increasing above all in some regions. It is possible that we can link this increase in the number of sites and the site concentrations in certain areas with a population growth, which also led to the formation of large settlements, such as open agglomerations and the so-called oppida.

However, a closer look at the data reveals several weaknesses of our database, which we do not want to conceal. Many sites are only known due to surface finds, so a functional determination of the site and an exact dating are often difficult.

Since the start of the project in 2017, students of three classes have studied the settlement dynamics, discussed the impact of the mentioned biases, and tried to understand the land use strategies that prevailed in Bavaria during the Iron Age.

Learning how to use the programs MySQL, QGIS, and R, and combining them to critically assess archaeological data were the key skills our students learned during their work on the project.

However, the drop out rate of students during the classes was high. This means that our classes were rather demanding and required a lot of work and time that not all students wanted to invest.

Having used a virtual platform for several years enabled us to quickly transfer this technology to other courses when the COVID-19 pandemic hit in early 2020. This allowed for a smooth transition from classroom to online teaching via Zoom, and has avoided significant disruption of the learning progress in the affected academic terms.