Living dialects1A language/dialect may be regarded as living as long as it is acquired spontaneously in every day communication and used face-to-face by all generations. This corresponds at least to level 6 of the language vitality scale proposed by ethnologue (http://www.ethnologue.com/about/language-status; called 11/1/2015). (♦) existing horizontally next to, or vertically below its corresponding standard language, cannot strictly speaking be described as variation, because ‘variation’ describes the situation where one variable manifests in multiple forms, and for complex systems it is not possible to formulate variables that encompass the entire system. At best, individual linguistic elements from multiple dialects including the standard variety can be described as spatial variants of a common historical variable or syntactic function. For example, in northern Italy, awa, owa, ayva, aga, ega, akwa etc. ‚water‘ are dialectal romance variants of Latin aquam (like standard Italian acqua, standard French eau etc.). This way, the Latin word can be described as their etymologic variable. 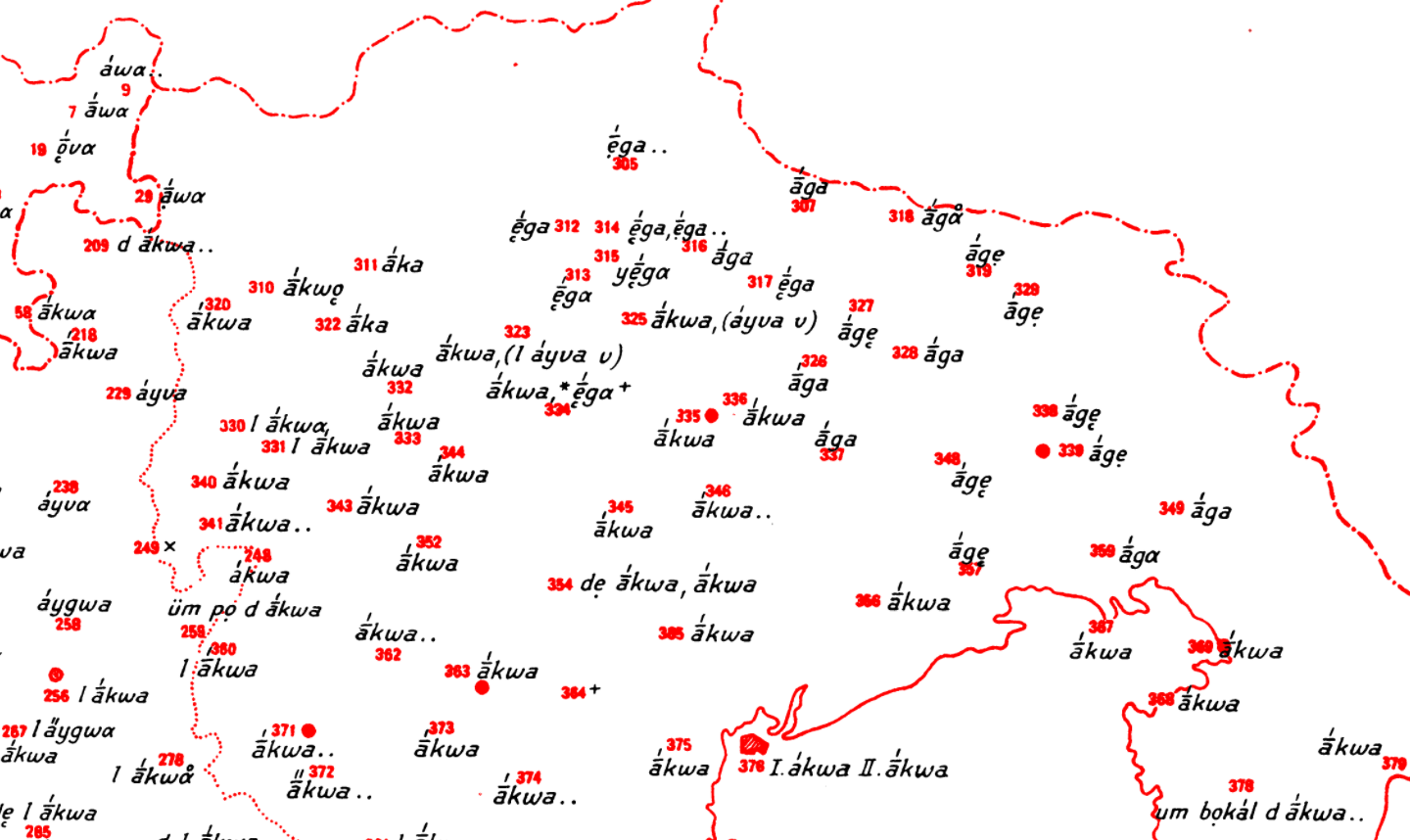 Individual forms from one variety can also be adopted by one variety from another through contact, and subsequently become variants (as in the case of the form ákwa in P 325 of the map above). But such variants of word are bundles of sounds and sound features and the example shows clearly that the geographic distribution of the vocal and consonantal variants is congruent at all. In some dialects the Latin vowel /a/ shifted to /e/ and the consonantal cluster /kw/ was reduced alternativly to the velar stop /g/ or to labial fricatives /v/, /w/; but /e/ combines with both of them. 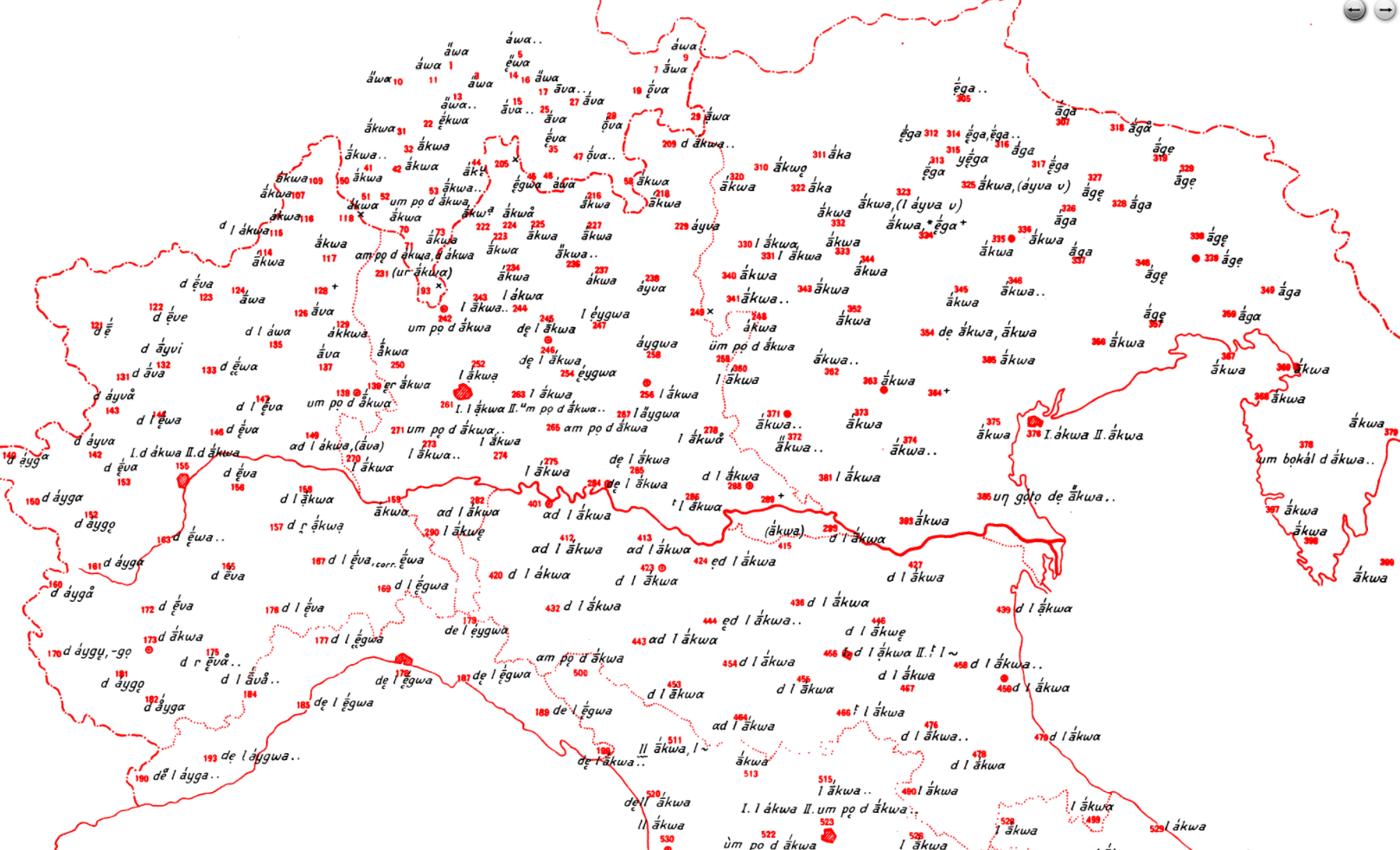 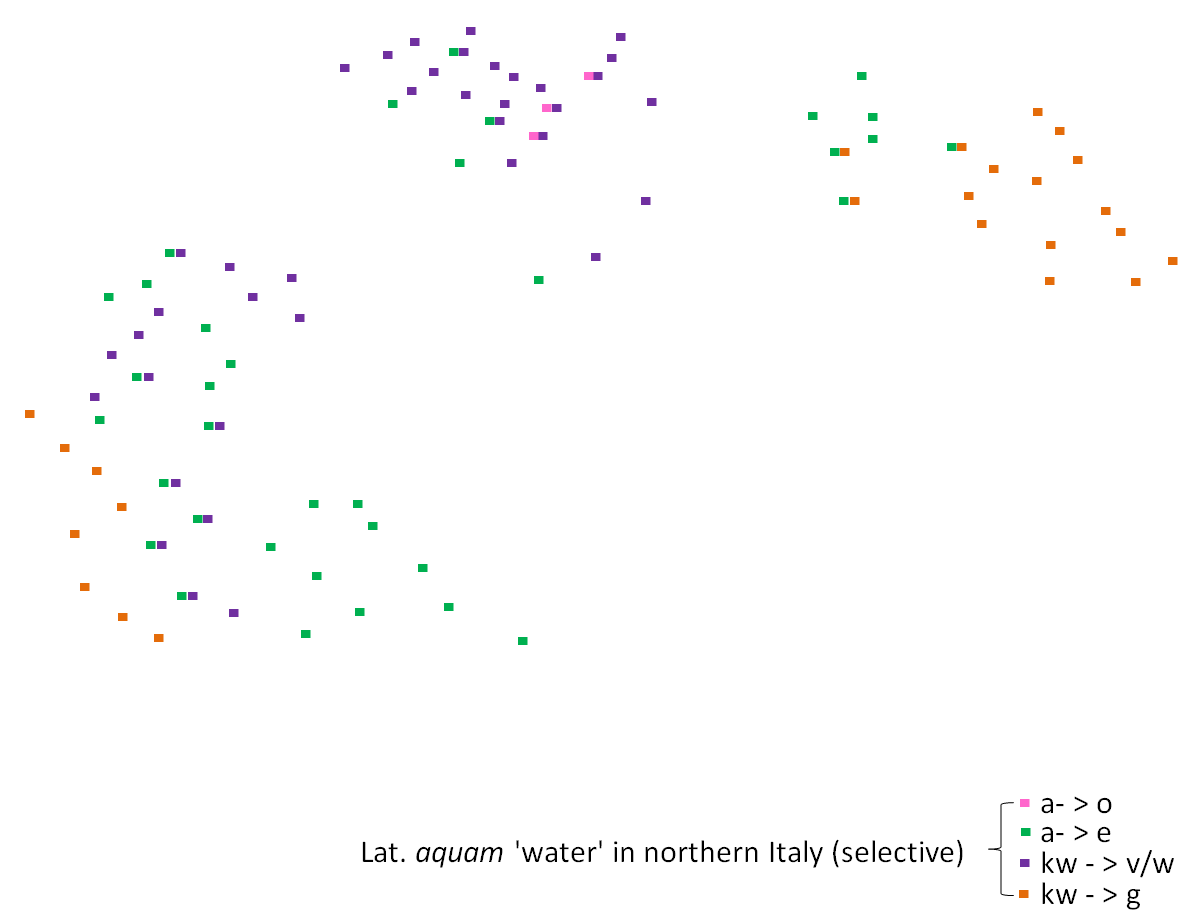 Given a distribution as illustrated by the map it is impossible to trace linguistic borders on the map, so that the ‘horizontal’ relationship between neighboring dialects and the ‘vertical’ relationship between a dialect and the standard language can only be described consistently as variation if the category of the ‘variety’ is abandoned in favor of openly varying continua. However, it is not useful to describe entire varieties – so-called minority languages, or even standard languages such as Sursilvan, Franko-Provençal, Occitan, Lombard, Standard Italian, etc., as ‘variants’, because the question arises: What could be the related variable? Romance? Italo-Romance? Central Romance?

Nevertheless it is hardly a convincing fundamental solution to give up the concept of ‚variety‘, because speakers are fully capable of immediately and holistically recognizing certain varieties – especially their own of course –without being directed toward certain salient features. Louis Gauchat also observed this fact, despite his clear insight into the existence of variation inside of a variety:

The fact remains, that the theoretical status of dialects in this sense is unproblematic, and therefore in some regard privileged; dialects are consistent varieties because, firstly, the correlation of individual variants in SPEECH and the geographic origin of a SPEAKER is evident and such is, secondly, the belonging together of these variants representing one and the same local dialect; dialects are local, or diatopically marked LANGUAGES, that is to say entire semiotic systems with a complete grammar, but with a specific sociological status defined by reduced functions in the communicative space.