The basic categories of linguistic description are the individual SPEAKER, the concrete SPEECH and the conventionalized system of the LANGUAGE. And this way, even beyond linguistics, the basic categories for the description of every cultural technique are identified: the INDIVIDUAL, the social BEHAVIOR or INTERACTION and the social CONVENTION1This formal trinity holds for several disciplines and might be substantiated, for literature (AUTHOR, TEXT, GENRE), religion (BELIEVER, RELIGIOUS PRACTICE, CONFESSION), jurisprudence (LEGAL PERSON, BEHAVIOR, LAW SYSTEM) etc.. However, language – in contrast to most other (or perhaps all) cultural techniques – is deeply anchored in the human cognitive neurophysiology, because our cognition (that is the mental processing of perceptual information and the acquistion of knowledge) can’t be separated from our linguistic competence. Expressed in the form of a computer metaphor, language is part of both the human hardware and software systems. But exactly like the other conventions (in contrast to other cognitive functions as attention, perception, memory etc.), language is subject to continuous, and sometimes radically accelerated historical variation. This occurs, among other reasons, because purely conventionally based cultural techniques use language as an instrument, and their changes can therefore be transferred directly to the language.

Such changes have been, for centuries, the increasing christianization of the roman, post roman and by europeans colonized world or – recently – the much more rapid global diffusion of new media. Whereas the first process brought a huge amount of greek and latin words and concepts the second one is a very important agent of linguistic anglicization.

From a spatial perspective, it is important to bear in mind that the spaces in which these different cultural techniques (or conventions, including language) operate are generally not congruent. Thus, it is historically and theoretically incorrect to expect consistently congruent cultural and theoretical spaces. Such a flawed viewpoint is the result of ideological prejudices: on the one hand, the SPEAKER and the SPEECH are not considered, and on the other hand, the LANGUAGE is seen as to be a system belonging to the whole collective. However, SPEAKERS, and often also entire groups of speakers, are mobile; in the wake of migration, they change their repertoires. They become multilingual, they acculturate towards monolinguals and multilinguals with different repertoires who themselves possibly undergo a process of acculturation. It would be interesting to investigate incongruities between the maintenance of ethnic labels (e.g. ‚Italian‘) and language use in the multiethnic context of Brasil. A case study might be Blumenau in Rio Grande do Sul:

Such a research could combine linguistic landscaping (street names, shops etc.) the analysis of language use in corresponding homepages and  social media (as tripadvisor).

2. From speech to language – via speaker

Linguistics is obviously built upon speech, where all data have their source. But processing those data is often not so easy, because a variant we observed does not necessarily represent a certain language system; they might as well be an effect produced by an individual speaker. Language, however, is never individual but social by definition. So linguists should evaluate the speaker before selecting from his data those which are thought to be relevant in order to construct the language system. 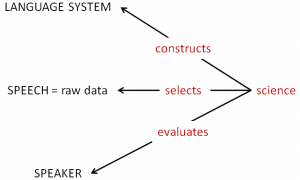 The case of idiosyncratic language use or language behavior seems to be unfrequent – yet it happens regularly in data given by bilinguals who switch to another language, remember that switching is never predictable. But an element coming from another language might also be absolutely conventional, that is to say a well integrated borrowing. Using a borrowing does not implicate any competence of that language the borrowed form originally came from.

Let’s have a look  at an example found in a blog post in Italian:

Three German elements are used in this post; the context explains that the author, an Italian girl, wrote the post while studying in Germany (in Berlin) and that she and her friends like using isolated German words, more or less for fun; actually they are not capable to speak German currently,  while they are learning this language.

A closer look, however, shows that the three elements don’t have the same linguistic status. Whereas the first two (deutschizzate, and versuchiamo)  are nothing else but speech effects, the third one is to be regarded differently. A simple internet query delivers many hits, so that the verbs ammeldare is obviously a well known variant for Italian immigrants living in Germany. It is, in other words,a salient borrowing in Italians varities which are spoken in Germany.

Five examples for German-Italian ammeldarsi ‚to register oneself‘

Notice from the methodological point of view, that the interet  gives examples, informations about the speakers and about the linguistic status of the element.